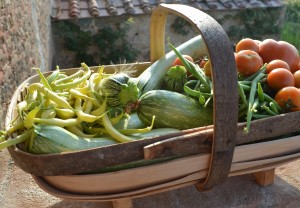 It’s planting season in Tuscany, the time of year I think of my role-model and rival in all things green: Mario, my former father-in-law.

When I came to Tuscany in January 2001, Mario had just retired, and he and my-mother-in-law still lived in Siena. He would come out to our house in the country for the day, though, and I would cook him lunch, a primo and a secondo, which he ate in the upstairs kitchen while I stared at him across the table and tried to make out what he said in those first weeks of submersion in Italian. “Don’t bother,” my husband said. “He garbles. No one understands a word.”

Sixteen at the outbreak of war, Mario never had to fight, because his father had been wounded in the First World War. His parents were farmers, so Mario and his brother Marcello kept on eating chickens and eggs and vegetables throughout the war, while in town food was scarce, only really waking up to the conflict when a bomb dropped through their roof, down through the floor of their bedroom into the kitchen, rolled out the door and across the lawn and came to a stop at the edge of the woods, unexploded. The four of them, and soon the neighbors, stood in a circle around it, staring skeptically and wondering what to do. Finally, Mario and Marcello picked it up and carried it into the woods.*

Marcello married young, and Mario—who looked only down the barrel of his gun at the hare he was about to kill or over the queen he held at his briscola rival—was best man for his brother, and, soon after, for his friend Alejandro, who married the only pretty girl in their Chianti town and with whom he promptly had a son. Mario was named padrino, godfather.

Mario moved into Siena and opened an armeria, a hunting and fishing shop. After the war, hunting was extremely popular, the laws extending the right to take a hunting license to men of non-noble descent being new to their generation. “Armeria Pianigiani” was right in the center of town, and Mario–handsome, popular, a known crack shot and expert in all things animal–proved a talented salesman.

When Alejandro suddenly died one year, Mario asked for his widow’s hand. She told him, “It’s certainly not love,” but accepted, and leaving her son with her mother during the day, came in to help at the shop. Knowing of Mario’s reputation as a spendthrift, from day one, she removed any money as soon as it came in, and hid it at home, sewing it into the hems of skirts, as her mother had done during the war. 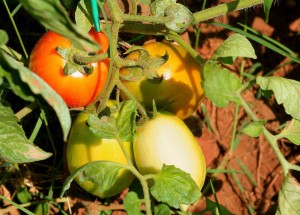 That first spring of mine in Tuscany, Mario planted lettuce, peas and beans, zucchini, eggplant and, after Easter as the rule goes, tomatoes—the smooth, round ones I find to be the sweetest, the “ox hearts” which have less flavor but a nice texture, and the famous San Marzano with less juice, ideal for canning. They were usually ripe by my birthday in mid-July, and I learned to prefer them pale: green mottled with orange, crisp and tangy, thin slices doused in salt, pepper and oil. A day longer on the vine and the skins grew redder, but also tougher, the flesh softened and the tangy-sweet contrast faded.

In the garden, I focused on flowers, extending a collection of roses along the property’s meandering stone wall, confining myself to old, perfumed varieties. I planted peony tubers that were to develop into bushes over the years, modern roses for cutting, bulbs of every kind imaginable and berries galore, the only fruits that were not already grown. Vegetables, I left to Mario.

On a holiday in Burgundy, I bought some tiny Charentais melon plants, despite my father-in-law’s warning that melons would not grow in Tuscany. They came along nicely, once planted in our dark-red soil, flowered and bore tiny whitish-green orbs, the beginnings of the small, sweet melons I had loved to eat in France but never saw at the markets in Tuscany.

The weeks of extreme heat and no rain typical of a Tuscan summer are at least predictable, but spring is a dangerous time in the garden: an unexpectedly cold night burns the lemon blossoms and a day or two of sun can scorch young plants. Mario went out to the orto at the crack of dawn infallibly throughout the spring, but I tended my plants less consistently, saving my energy for the very hot months when I would, I knew, spend at least an hour a morning hauling the hose around. Sure enough, after a few hot days of ignoring the garden, I went out to find my melons shriveled beyond saving. I wondered angrily why Mario, who would have realized what was happening, had not so much as sprinkled them with a few drops of water. Looking around my corner of the orto, I figured he must have watered my other young plants as they all looked fine. I was furious and sad to lose my Burgundian imports, my special, non-Tuscan project. I looked up to see him commiserating. “It’s better it happens now. They wouldn’t have come to anything anyway.”

Many gardening seasons later, I planted a melon patch in a south-facing spot with wonderful soil at my house in Chianti. The fellow who helps me recommended putting up a screen: too much sun would be dangerous for the melons. That year, 2014, proved the coolest summer in history, and the melons rotted on the vine. Last year, I started over, and as the terribly hot summer wore on I began to anticipate the sweet cantaloupes whose dark green stripes I could already see on the baseball-sized melons. I counted 60 days from blossoming, and easily plucked my prizes from their now-ripened stems. If they were anything like grapes or berries, a hot summer would mean sweet, concentrated fruit. I went into the kitchen, washed off a melon and sliced it up. No taste at all. Maybe Mario was right, melons don’t grow well in Tuscany. I wish he were alive to taste my tomatoes, though, already ripe for the picking last year on the 1st of July, two weeks before his ever were!

*My dad told this story in an article for the Groton Herald.

I am a mother, homemaker and winemaker living in Siena, Italy. View all posts by Jem Macy