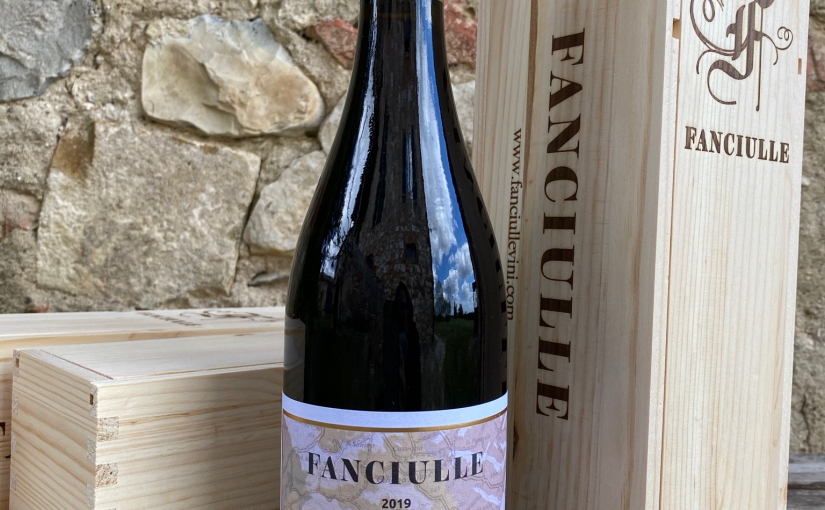 In the days since releasing the first vintage of the Fanciulle wines, friends and customers have asked me what the wines are like, what inspired me to make them, what makes them different from other Tuscan or Italian wines. The truth is, almost everything about the wines and how they’re made is pretty unusual, and, ultimately, one can taste that, especially in the delicacy, the lightness of the wines.

In September 2019, I was looking for a vineyard to buy—old Sangiovese on a certain kind of terrain I like, the Monte Morello formation. I had been looking for a few years and, as readers of this blog know, I had met with some disappointments. I was sharing the story with a friend and fellow winemaker in Tuscany at a party for wine journalists in a villa outside of Florence, when to my surprise and delight, she offered to sell me some grapes.

Making fine wine from bought grapes is common in Burgundy or in California, and some of the most lauded names in the world of wine are, or were born as, “négociants,” organisations that buy grapes, and make, bottle and sell wine. But in Tuscany, it is mostly the province of wine bottlers working on a huge scale to produce inexpensive wine. I was intrigued by her offer, went to look at the grapes that week and agreed to buy a few tons at harvest. Fanciulle Wine was born. Even the business model is innovative.

Now, a year-and-a-half later, as the growing season begins in what is now my own vineyard, as Marta, my colleague, and I plan the vineyard and cellar work, and as I think about the people, skills, supplies and expertise we will need for the coming year, I realize what a different path we have taken. We’ve just finished pruning the 75-year old vines in our one-hectare (about 2.2 acres) vineyard—each vine a world of twisted trunk, pruning scars, living and dead branches unto itself. I stand before them and think of the vast root systems that must be below, of all the seasons in which the vines have grown and thrived (more, or less, depending on the year’s temperatures and rainfall), of all the grapes these vines have made, year after year after year. The vines themselves are a rarity: less than 15% of grapevines in Tuscany are at least 40 years old, let alone 75.

We pruned with manual—not battery operated—sheers, and we trimmed the dead wood with a small, hand-held saw. We’re tying the shoots to their natural supports (old, non-fruit-bearing pear trees, planted for the purpose, all those decades ago) with moist willow fronds. In the wide spaces between the rows, we will mow the grass with a manual lawn-mower, like the one my uncle used to have, and to spray the vines with copper, I have a back-pack tank with a hip-level pump and a hand-held, manual sprayer.

When I bought the vineyard, I thought about buying a tractor, but I hated the idea of noise and exhaust. I didn’t want the soil compacted, either. There are only a thousand vines; I have the luxury of time. As those who have helped with the harvest at Fanciulle Vini know, we de-stem by hand, rolling the bunches over a grate perched on the rim of a tank. I don’t add yeast– it’s already there in that dusty film on the grapes’ skins–or tannins, or any of the other standard products in use. We avoid pumping over the musts, though it is a common practice here, often carried out via pumps built into the tanks–alas! Pumping over provides oxygen to the fermenting must, but we oxygenate with a pitcher plunged into the tank, its juice poured back over the mass of grapes. Pumping over also aids in extraction, but extraction doesn not need help in Tuscany. Here, the grapes get plenty of sun, and the skins are rich, so color and tannin abound. I want to make subtle, delicate, ethereal wines that are light on their feet. Infusion is the answer, not extraction.

I did invest in a basket press, which gently squeezes the skins that are left once the wine has run off. Because our de-stemming is manual, our grapes are mostly still whole—undamaged even after a week of fermentation, so what comes out of the press can be the freshest, most complex wine of all, fermented away from oxygen, as it were, inside the grape itself.

After alcoholic fermentation, part of each wine goes into a French oak barrel (another unpopular, misunderstood step in winemaking), where it is left undisturbed until bottling, so that it clarifies naturally. Sometimes, the wines need to be filtered, to achieve the precision of flavor and texture that I like. I want to filter with diatomaceous earth–something that’s done in Burgundy–but I have yet to find anyone in Italy who knows the process. Our bottle is the lightest on the market, at 400g, and our labels provide as much information about the vineyard, vintage, winery and winemaking as we can squeeze onto them. The map on the front shows the area the grapes came from—the name of which is not permitted on the label! Finally, we sell our wines directly to those who drink them, because that way we can serve you best.

I am a winemaker and writer. View all posts by Jem Macy

One thought on “Against the Grain”