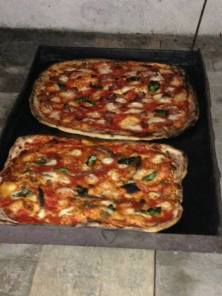 Yesterday, Lidia, Luciana and Bruna came to make pizza. They came early, built a huge fire in the old brick oven, and sat on folding chairs on the lawn while it burnt all day. Then around five, they went to work extending the dough on the rectangular, aluminum teglie, smearing the sauce across, scattering the mozzarella, and at last shoveling out all the coals and settling the pizzas toward the back of the oven’s dome to cook. The tomato sauce was ours from the garden, but the mozzarella was supermarket, yet the pizza was divine: crispy, tangy, milky, and tinged with roasted flavor.

One day the dogs had started barking and run toward the back of the house. They kept barking, and I thought I heard people; I would have to go down and see. At the back fence stood three small women, one dark-haired, round and disheveled, looking around her, seemingly confused, the other two smaller, neater and immobile.

“Is there still the oven?” the first one called out as I came down the outside stairs in such a thick, unidentifiable accent that it took me a minute to understand.

They had walked from the village, she explained. Every now and then they came back, she said. She wanted to know about the oven, so I opened the gate and lead them over. Ah, there, she said and all three of them stood looking at it as if in relief at seeing an old, beloved relative still alive. I lifted the iron plate away from the mouth of the oven and stood aside. One after another, they came up to it, bent over and stuck their heads in, turning up to look at the black, black bricks of the domed ceiling of the oven. There was that faint smell of cold ash tinged with something like spice, like the inside of an empty church.

They had been sharecroppers here, they said, for thirty years. They had worked the land—and what land it was, they assured me. They told me again, they had worked the land, speaking those three words—“lavorato la terra”– with reverence and pride. For a second, I thought of all those winery brochures, with their introductory paragraphs explaining how the Milanese industrialist owners bought the place so they could “get back to the land.” Did they know what that really meant?

The three women stood back and looked up at the house. They had been seven families, and they pointed out the windows of the areas of the house where each had lived, Lidia, the round one, speaking, the other two seconding her. One family’s name they couldn’t recall.

“There’s nothing can compare to the bread that oven makes,” Lidia, who had overseen the weekly production of bread for the farm, said. “You ever light it?” she turned to me and asked.

“Well, yes,” I told her, “occasionally. For the childrens’ birthdays, we have people over and get it going and make pizza.” I babbled on: “Of course, when you light it, it makes sense to cook everything: bread, pizza, a roast and so forth–I mean, after all the wood you use getting it hot,” the idiocy of my feigned parsimony fortunately interrupted by Bruna’s claim that Lidia’s pizza had no rivals.

“You should come over and we’ll put that claim to the test,” I offered.

Lidia thought a moment, looked up at me, and said, “But I’d bring my own impasto,” as Luciana and Bruna nodded vigorously. Nostalgia for the oven aside, they weren’t going to trust any American to mix up the dough.

What Lidia said next caught me off guard. “Are they the only ones here?” she asked, using “loro” which is both the modern, informal word for they, and, when capitalized, an ancient, very formal form of direct address that I had heard used only once, years before, by an old priest. She was addressing me, “Are you the only ones here?”

“Well, yes,” I said. She looked over to where we had the vegetable garden in summer. She was right, the land was wonderfully fertile. Our tomato production had been the envy of our friends that year. But it meant something else to her. They had left in 1998, her husband taken on as a real employee of the owners, who set about refurbishing their fourteen farms to sell off one by one.

She looked around again, gathering herself to leave. “Ah, si stava bene qui,” she sighed, “How good it was here.”

I am a winemaker and writer. View all posts by Jem Macy

One thought on “Down to Earth”